The first five terms of an arithmetic sequence are:

Find an expression for the \(n^{th}\) term of the sequence.

Here is a picture of four models. Some of the cubes are hidden behind other cubes.

(a) How many cubes are in the third model?

(b) How many cubes are in the fourth model?

(c) If a fifth model were built, how many cubes would it take?

(d) Find an expression for the number of cubes used in the nth model.

(e) Sketch a side view, front view and plan view of the fourth model.

(b) In a sequence of four numbers, the difference between each number is 9.
The sum of the four numbers is 2.
What are the numbers in the sequence?
You must show all your working.

(d) Find the sum of the first 9 terms of this sequence.

Find an expression, in terms of \(n\), for the \(n\)th term of the sequence that has the following first five terms:

The diagrams below show a sequence of patterns made from red and yellow tiles.

The total number of red and yellow tiles in each pattern is always the sum of the squares of two consecutive whole numbers.

(c) Is there a pattern for which the total number of tiles is 303? Give a reason for your answer.

(d) Explain why the total number of tiles in any pattern of this sequence is always an odd number.

(a) Find the common difference.

(b) Find the number of terms in the sequence.

(c) What is the sum of the sequence.

(a) Write down the value of the common difference, d.

In an arithmetic sequence, the fifth term is 44 and the ninth term is 80.

(a) Find the common difference.

(b) Find the first term.

(c) Find the sum of the first 50 terms of the sequence.

A square is drawn with sides of length 32 cm. The midpoints of the sides of this square are joined to form a new square and four red triangles. The process is repeated to produce yellow triangles and then again to produce blue triangles. 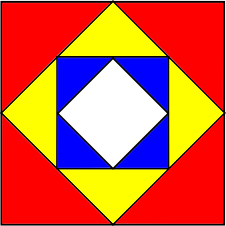 (b) The process of drawing smaller and smaller squares inside each new square is repeated. Find \(A_7\)

(c) Consider an initial square of side length \(k\) cm. The process described above is repeated indefinitely. The total area of one of each colour triangles is \(k\) cm2. Find the value of \(k\).

A celebrity football match is planned to take place in a large stadium.

The most expensive tickets are in the first row. The ticket price for each row forms an arithmetic sequence. Prices for the first four rows are shown in the following table.

(a) Write down the value of the common difference, \(d\).

(b) Calculate the price of a ticket in the 19th row.

(c) Find the total cost of buying 5 tickets in each of the first 10 rows.

(a) Find the common ratio.

A Grecian amphitheatre was built in the form of a horseshoe and has 22 rows.

(e) Find the total number of seats in the amphitheatre.

Some time later, a second level was added to increase the amphitheatre’s capacity by another 2590 seats. Each row has five more seats than the previous row. The first row on this level has 82 seats.

(f) Find the number of rows on the second level of the amphitheatre.

Chris checks his Twitter account and notices that he received a tweet at 8:00am. At 8:05am he forwards the tweet to four people. Five minutes later, those four people each forward the tweet to four new people. Assume this pattern continues and each time the tweet is sent to people who have not received it before.

The number of new people who receive the tweet forms a geometric sequence:

(a) Write down the next two terms of this geometric sequence.

(b) Write down the common ratio of this geometric sequence.

(c) Calculate the number of people who will receive the tweet at 8:40am.

(d) Calculate the total number of people who will have received the tweet by 8:40am.

(e) Calculate the exact time at which a total of 5 592 405 people will have received the tweet.

The sums of the terms of a sequence are given as follows where \(k\in \mathbb{Z}\):

(a) Find the first four terms of the sequence.

(b) Find a general ex