Dinner For Too Much

It’s April, the month of foolery and fun but you’ll need a real poker face to pull off the April Fool’s Lesson Starter. The instructions clearly say to read all of the questions before doing any of them and it’s only when pupils get to the end that they realise that the joke is on them.

Let’s swiftly move on to the puzzle of the month. The price of dinner for two in a restaurant is increased by 4%. The new price is an exact number of pounds. What is the smallest possible cost of the meal?

While you think about that here are some of the key resources added to the Transum website during the last month.

The Trigonometry online exercise has had a complete makeover and a brand new help video. The first six levels break down the three basic trig ratios and for each the difference in finding an angle or one of the sides. Level seven is a mixed exercise and level 8 is a marathon of 20 questions ranging from the simple to multi-step problems.

Don’t Shoot The Square has been completely rewritten. It now comes in ten levels of difficulty so there should be something there for every pupil wanting to test their knowledge of square numbers while playing a fast-moving game.

For my many remote lessons over the last year I had built up a collection of backgrounds that could be used with Zoom, Teams, Meet or whatever video system you are using. As I create them I’m sharing them with you via the Shine+Write page. I’ll keep adding more as I make them.

I have almost finished editing a new Circles (area and circumference) help video but by the time you read this it should have already been uploaded. It includes my first attempts at stop-motion animation and if you are interested, I did eat the cheese sectors afterwards.

There isn’t a specific page for Easter activities on the Transum website but there is one egg-cellent activity called Egg Box Investigation which might be particularly appropriate for this time of year. Arrange the eggs in egg boxes then click the camera icon to record your pattern. Then go on to find all possible patterns. There's also a Fried Eggs riddle but that's probably taking the Easter connection too far.

You probably already know, but a quick reminder of two pages designed for this point in the Term. End of Term and Holiday Activities both (hopefully) contain great resources for you and your pupils. 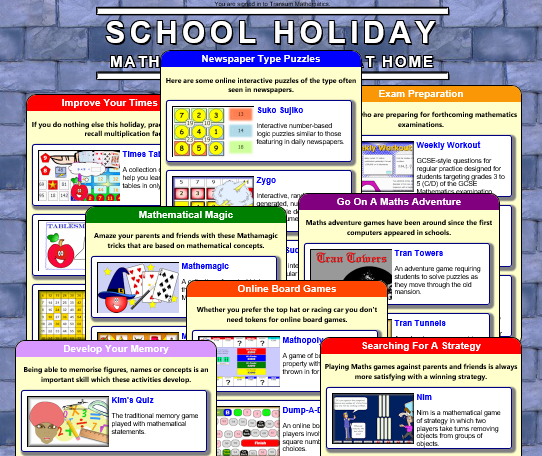 I think most pupils will be sitting some form of exam in the next couple of months so in order to help them prepare you might want to share this page called unsurprisingly Revision.

I try hard to keep up with the latest politically correct thinking when designing new resources. I use many images of people and have achieved a balance of different types throughout the whole website but individual pages obviously won’t contain the whole range. This last month I was made aware of an older page where I had used the now unsuitable older word for Inuit people. That has now been changed. Please let me know if you spot anything else you fell might be inappropriate with today’s standards.

I recorded this month's podcast, which is the audio version of this newsletter, while cycling around Bangkok airport. There can't be any other Maths podcasts also providing such an unusual sound-seeing tour! You can find it on Spotify, Stitcher, Apple Podcasts or directly on the Transum Podcast page. 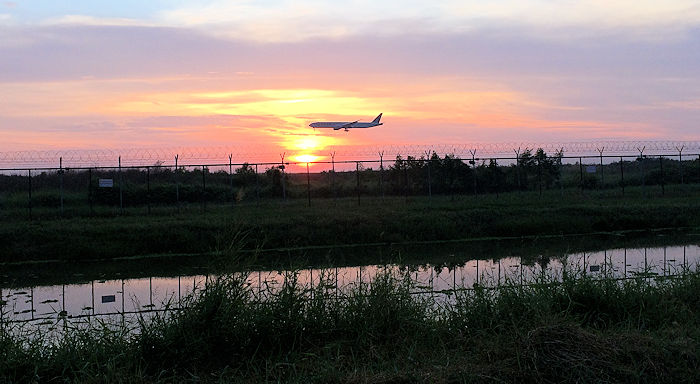 Finally the answer to this month's puzzle:

which may be rearranged to

This puzzle can also be solved with a trial and improvement strategy (there's a high probability that the answer is a low two-digit number as it's the cost of a meal), by using a spreadsheet (I used the reverse percentage method) or by writing a simple program to launch a brute-force attack!

You may have come up with the answer £25 as the original price and £26 as the new price based on the fact that 4% is one twenty fifth of a whole. This is indeed a more reasonable estimate of what a two-person meal might cost (without drinks) in a nice restaurant. It is however not the smallest solution but good try!

This puzzle is adapted from the 2011 Senior ‘Kangaroo’ Mathematical Challenge paper produced by the United Kingdom Mathematics Trust.

P.S. If you eat chocolate eggs before or after the Easter holiday you may be guilty of egg-strapolation!