It seems such a long time since the last newsletter but here it is again to welcome the month of September 2015. I have had a wonderful summer (northern hemisphere) and managed to visit lots of places and catch up with many old friends. I always had my laptop with me so found the time to write more puzzles, quizzes and activities to add to the ever-growing Transum collection.

Before going any further let’s go straight to the puzzle for this week. This is to give you something to think about as you commute, exercise or relax today so don’t look at the answer at the bottom of this newsletter if you want to enjoy the challenge.

While you think about that here’s a mention of some of the new activities created since the last newsletter.

The Fractal Mosaic is an interactive, animated version if the Snowflake Squares activity. A fractal-like pattern can be created by following a very simple set of instructions that are repeated a number of times. The end result makes excellent display material. Talking of which, a new section called Maths On Display has been created giving you some ideas of how your pupils can engage in mathematical activities that produce very pleasing results. 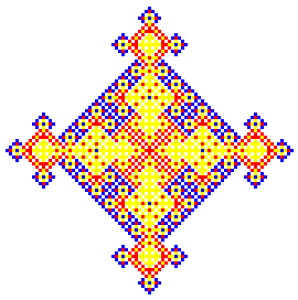 Following the success of the Bridge Crossing starter a challenge called ‘Without Lifting the Pencil’ provides pupils with six designs that they have to decide whether they can trace according to the rules. Instead of actually using a pencil and paper the Transum interactive version allows them to click dots (the nodes) to simulate the tracing and makes it easier for them to try many different routes quickly and not worry about making mistakes.

A Frequently Asked Questions section has been added for subscribers but, thus far, there are not many questions and answers posted. The plan is to add to this slowly but surely over the coming months. If you have any questions about using Transum Mathematics please let me know as your question might be suitable for this FAQ page.

The One Torch Tunnel challenge has been added as an interactive page which I hope will be as popular as River Crossings is. It is quite easy to get all four people through the tunnel but not so easy to do it in the optimal time.

A Fibonacci Quest section has been added. The plan is to, over a period of time, add fascinating Fibonacci facts to these pages but each new page will have an interactive aspect to it so that pupils learn by doing!

The Probability Washing Line is certainly not a new idea. Pupils are invited to hang out the shirts, each containing a probability word, on a line stretching from impossible to certain. The software will check their attempts according to some very loose rules.

There was nothing on the website to practise Telling the Time … but now there is! Lots of analogue clocks with some mixed questions thrown into level four. As with all other activities on the site let me know if you think this section should be expanded.

The answer to the puzzle asked at the beginning of this newsletter can be explained as follows.

The same argument can be also applied to the second mathematician who must also have wanted a drink.

The third mathematician was quite certain he wanted a drink himself bringing the total to three.

That’s all for now. Enjoy September and if it’s the beginning of your school year enjoy all that newness and new-beginning enthusiasm that’s around at the moment.

PS. How many times can you subtract 7 from 83, and what is left afterwards?

Answer: I can subtract it as many times as I want, and it leaves 76 every time!