This is the newsletter for June 2021 and I hope it finds you fit and well.

While you think about that I’ll mention some of the new resources on the Transum website added last month.

Unbeknownst: Most of the picture sum puzzles shared on social media can be solved as linear equations. This new activity generates situations best solved using simultaneous equations. There are five levels of difficulty and at each level, if you refresh the page, the puzzle changes.

Simultaneous Shopping is another new equations-from-pictures activity and I’ve added shopping baskets containing coupons to introduce negative coefficients for the equations generated. My thinking is that this coupon-included level 5 will be a small step for pupils who have completed the other four levels. Let me know what you think.

Two new help videos were created and uploaded last month. One covered the formulas for finding the Volumes of solid shapes and the other covered Area and Perimeter.

An exercise on the Area and Perimeter of a Kite has been added to the Kite Maths collection. This old section of the website was originally inspired by my amazement at the amount of mathematics that can be represented by folded kites and the stunning displays that can produced as a result.

Transum subscriber Chris Boardman suggested the Standard Form Algebra exercises and sent me some great question ideas. I have already been using it with Year 11 pupils.

Talking of Year 11 pupils, one of them has asked for help with some equations he’s encountered in Physics on the propagation of uncertainties. I thought I’d be well equipped to help out having taught Upper and Lower Bounds for many years but then I discovered that this Physics topic is something else completely. Look it up on Wikipedia to see what I mean. Oh well, I have until tomorrow to make sure I can answer the questions in the text book and that I don’t get asked to derive the formulae (the first one is understandable but I need to research the others).

Have you ever had the experience of realising something later in life that you wondered how you'd missed before. Over the weekend I found out that there are Roman numerals for fractions! I had to quickly add two new levels to the Roman Numerals exercise to include the fractions while I was excited by the idea. I reckon it will be good for extension work for those who quickly master the Roman integers.

I made a Lesson Countdown page for myself but I guess that others may find it useful. It works with the Class Admin lesson plan pages and provides both a digital and analogue countdown for the time of the lesson as recorded in the lesson plan. It contains a reduced-size version of the starter as listed in the lesson plan and a reminder to pupils about the equipment they should get ready before the lesson starts. When the countdown finishes it automatically loads the full sized version of the Starter. I envisage this being projected on the whiteboard at the front of the classroom for the benefit of those arriving early to the lesson but that is not what inspired the idea. My plan is for it to be used as your ‘shared screen’ on Zoom or video conferencing platform of choice in the minutes before your online lesson starts. It will be better than having a blank screen, waiting room or, if you are not careful, pupils watching you make your last minute lesson preparations or stroking your cat! 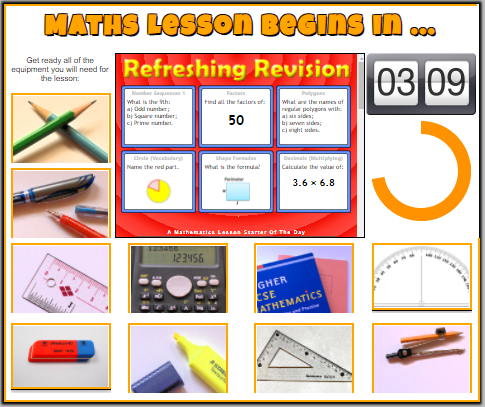 Talking of online lessons, my repertoire of methods and resources has grown exponentially over the last twelve months. My latest ‘must have’ is ManyCam. I think it is absolutely brilliant. If you can imagine the control room at a big TV studio where they have numerous screens showing different views of the studio and they can easily switch from one to another… well ManyCam provides that on your computer. There isn’t space in this newsletter to explain the benefits you probably haven’t even thought of yet but I’d love to share with you just how much better my online teaching is now. 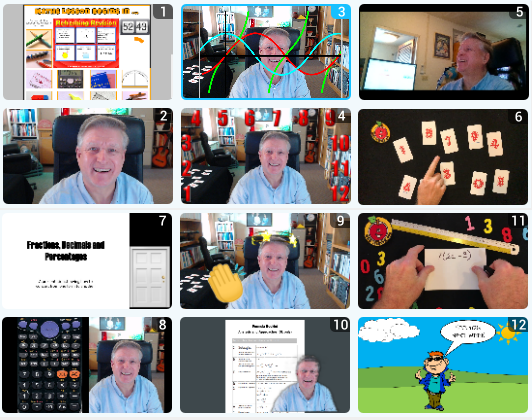 When ManyCam is launched you can create many 'presets' that you can smoothly transition between during your lesson. Here are some examples (above) of presets I've been using recently.

Have you come across the polyominoes activities on Transum? There are a couple of dominoes challenges along with a tetrominoes, pentominoes and hexominoes investigation. I am sure that you, like me would point out the etymology of these words in passing but, it was only this week I learnt that the ‘do’ in dominoes isn’t a prefix meaning two. The word originally meant a hood with a cloak worn by canons or priests over other vestments in cold weather. This fact was revealed as I was brushing my teeth listening to a podcast. I’ve included the excerpt in the podcast version of this newsletter.

Finally here is the answer to the puzzle of the month: Mrs P put down £1 in small change (20 pence and 10 pence coins), from which the driver could see that she wanted a £1 ticket because otherwise she would have given him exactly 70p. Mrs Q put down a £1 coin, which could be used to pay for either type of ticket.

Look after yourself and, if you can, someone else too.

P.S. I put invisible ink in the printer before printing a maths question. I couldn’t see what the problem was.