Calculator Keys at the Corners of a Rectangle

Welcome to the Transum newsletter for November 2018. Here is this month’s puzzle.

Type a four digit number on to your calculator. The keys used to type in this number must form a rectangle. Each digit should be one of the corners of this rectangle and you can work your way around this rectangle either clockwise or anticlockwise starting at any corner of the rectangle. 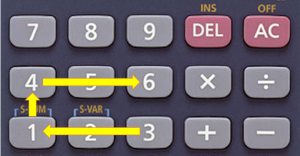 After you have created many four-digit numbers using this method you should see that all of the numbers have something in common. They are all divisible by the same prime number. What is that number? The answer is at the end of this newsletter.

Now I am excited to tell you about the new additions to the Transum website that appeared during October.

Venn Paint Level 3: Shading areas of Venn diagrams is much better done using this web page rather than paper and crayons as you’ll find the undo button very useful. Levels one and two have been popular for a number of years now but yesterday I added a level three which contains some of the more unusual looking Venn diagrams.

Venn diagrams were introduced to the world by mathematician John Venn (1834 – 1923). What is less well known is that he also built rare machines. One of his machines was designed to bowl cricket balls. It was so fascinating that when Australian cricketers were visiting Cambridge, the machine was used to entertain them and it actually bowled out the top ranked player of the team four times consecutively!

Cylinders: A new multi-level online exercise requiring pupils to apply formulae for the volumes and surface areas of cylinders to answer a wide variety of questions starting with the routine and going on to more complex problem-solving experiences.

Fractions by Wholes: Although there are already many fraction activities on the site this new exercise has its niche. It is a three-level set of exercises on multiplying and dividing proper fractions and mixed numbers by whole numbers. As an added bonus jigsaw pieces are awarded for each correct answer and these pieces can be dragged to form a picture containing a mathematical joke.

Pascal's Triangle: Get to know this famous number pattern with some revealing learning activities ranging from filling in a partially completed triangle to colouring in multiples to reveal beautiful patterns.

Pascal's Christmas Tree: Following on from the previous activity and introducing a festive theme, this fun interface allows pupils to light up the Christmas tree by flashing numbered lights according their own number patterns.

Last week while on one of my regular park runs I enjoyed listening to a podcast by Grammar Girl. The presenter, Mignon Fogarty, explained that numbers do not exist in all cultures. There are numberless hunter-gatherers embedded deep in Amazonia, living along branches of the world’s largest river tree. Instead of using words for precise quantities, these people rely exclusively on terms analogous to “a few” or “some.” For the bulk of our species’ approximately 200,000-year lifespan, we had no means of precisely representing quantities. What’s more, the 7,000 or so languages that exist today vary dramatically in how they utilise numbers. Mignon explores the ways in which humans invented numbers, and how numbers subsequently played a critical role in other milestones, from the advent of agriculture to the genesis of writing. If you would like to know more about this you can find it at  Grammar Girl episode 642. The podcast takes its information from a book called Numbers and the Making of Us.

The answer to the puzzle of the month is eleven. Subscribers can see the proof of this fact on the Advanced Starter page called Key Eleven.

That’s all for now