When Was Will Born?

A prime number has two and only two factors.

Thirty days hath September,
April June and November.
All the rest have thirty-one
Excepting February alone,
Which has twenty-eight days clear,
But twenty-nine each Leap Year.

The day is a two digit prime number. The two digits are consecutive numbers.

How old would he be if he was alive today?

How did you use this starter? Can you suggest how teachers could present or develop this resource? Do you have any comments? It is always useful to receive feedback and helps make this free resource even more useful for Maths teachers anywhere in the world.
Click here to enter your comments.

If you don't have the time to provide feedback we'd really appreciate it if you could give this page a score! We are constantly improving and adding to these starters so it would be really helpful to know which ones are most useful. Simply click on a button below:

Excellent, I would like to see more like this
Good, achieved the results I required
Satisfactory
Didn't really capture the interest of the students
Not for me! I wouldn't use this type of activity.

Previous Day | This starter is for 14 July | Next Day

Your access to the majority of the Transum resources continues to be free but you can help support the continued growth of the website by doing your Amazon shopping using the links on this page. Below is an Amazon search box and some items chosen and recommended by Transum Mathematics to get you started.

Here a concise URL for a version of this page without the comments.

Here is the URL which will take them to a general knowledge maths quiz. 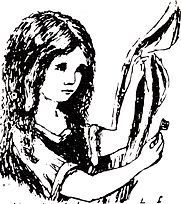 It would be fun for everyone in the class to stand in a line in order of their birthdays. Does anyone have the same birthday as someone else?

Alice in Wonderland learns that in a class of 23 pupils the probability that two have the same birthday is more than a half. Alice is a fictional character created by author and mathemetician Lewis Carroll (1832-1898) but the probability fact is true.

Find more interesting facts like that on the Mathematics Trivia page.

Leap Year - The 29th February Starter about Johnny Leaper who was born on the extra day in a leap year.

Cheryl's Birthday - An advanced Starter about an Olympiad Maths question posted on Facebook.

Cake Cut - This puzzle comes out of a need to carefully and accurately cut the last piece of a birthday cake into two equal pieces.

And finally there is a birthday card for all of our loyal Transum subscribers.

The front of the card contains a mathematical joke about rounding up. There is a puzzle, Maths facts and some funny puns inside. All good fun for a person's special day.

The card is designed to be printed on A4 card (double sided) and can be downloaded here.