Best wishes for another new month and I hope you are well, happy and safe. This is the newsletter for November 2021 and begins with the puzzle of the month:

Maureen and Doreen both have some 20p coins and some 50p coins. Can you work out how much more money Maureen has than Doreen from these three clues:

While you contemplate the most efficient way of solving that (answer at the end of this newsletter) I will update you on the latest Transum developments.

The Songkran Game has been updated to make it interactive. It’s a fascinating situation to investigate producing a range of outcomes ranging from following instructions, pattern spotting and modelling with technology to establishing a formula for the general case. The latter is on the slightly more difficult side of the spectrum so that might be saved for the highest achieving amongst us.

Two new levels have been added to the BIDMAS exercise. Level 3 now requires pupils to drag a pair of brackets into the correct position in a calculation and Level 5 is a challenge to find the missing numbers.

A new video on measuring angles has been produced to go with the (very popular during lockdown) Measuring Angles online exercise. No excuse now for not having a protractor!

Another new video was uploaded yesterday providing worked examples to typical Tree Diagram exam questions. I am still trying to think of a good way to help students remember that you multiply along the branches but add down the columns.

Two new Advanced Starters have been devised and the first asks for the sum of two tan values.  Tansum (not Transum - did you see what I did there?) is an unusual geometry problem because some of the information given is redundant. It boils down to realising the connection between the tan ratios of supplementary angles so reference to the graph might help.

Temperature Sum (I should have called it Temsum!) encourages students to think about the relationship between the Fahrenheit and Celsius temperature scales. Because they don’t share the same definition of zero you need to be careful when doing temperature calculations.

In response to a request by subscriber Barry, the Random Recap lesson finisher has been updated. It is now possible for you to include your own questions and, assuming you loaded the page from you Class Admin dashboard, you can save your questions too.

Are you in London? If so you may be interested to know that the prize for the challenge at the bottom of the Roman Numerals Starter of the Day page is still unclaimed! Somewhere in London is a monument with a date in Roman numerals inscribed on its north side. The number contains each of the Roman digits once each in order from M to I. The first person to send Transum a photograph of themselves in front of this inscription will win a nice mathematical prize.

Last month I told you about the Kim’s Game video which was presented in the form of a poem. I have also written rhyming verses for the 3D Trigonometry presentation, the Dividing in a Ratio presentation and Number Rhyme. Last week I found myself Tweeting in rhyme about the Halloween Starter.

None of the above are as satisfying as Gilbert and Sullivan's Major-General's Song. Here is the classic mathematical verse:

I understand equations, both the simple and quadratical,

About binomial theorem I'm teeming with a lot o' news,

With many cheerful facts about the square of the hypotenuse.

Wonderful rhymes don’t you think? The audio is included in this month’s Transum podcast. Anyway let’s get back to Transum.

The latest Scheme of Learning to be added to the Curriculum page is for Year 5. Again thanks to White Rose Mathematics for permission to use their planning and I hope these pages help you more quickly find relevant Transum resources. 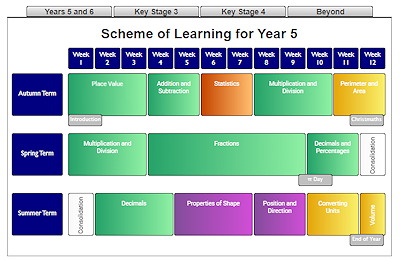 Meanwhile in the UK the Department for Education has decided as a matter of policy, and in view of the disruption caused by the pandemic, that it is not necessary for students to memorise formulae for GCSE Maths as they must in a normal year. In light of that policy decision, The Office of Qualifications and Examinations Regulation (Ofqual) has decided to amend the Conditions and Requirements to require exam boards to provide a formulae sheet in the exams. Exam boards will provide copies of the formulae and equation sheets for use in teaching and to ensure that students are familiar with them prior to the exams. Clean copies of these sheets will be provided in the exams.

Despite this I’m sure everyone would agree that it is still just as important that students know or at least are very familiar with the formulas and just use the sheet for a final confirmation. A fun way to increase this familiarity is to play the Formula Pairs game.

Finally the answer to this month’s puzzle: Maureen has £7.20 more than Doreen.

This is how I worked it out (without using algebra): Doreen has 24 more 20p coins than Maureen so Maureen must have 24 more 50p coins than Doreen if they both have the same number of coins in total.