Wind and Snow in Lapland

It’s beginning to look a lot like Christmas so after first wishing you all the best for the festive season and informing that you can now open the first door of the (Maths) Advent Calendar I’ll continue with the puzzle of the month.

5 mornings in total were windy;

9 afternoons in total were windy.

How many days had no snow at all and how long was his trip?

While you try to think which of your well-practised mathematical algorithms can be employed to solve that puzzle I will tell you of some on the new resources added to the Transum website this last month.

The Improper Fractions exercise was created in record time in response to a suggestion from one of the Transum Subscribers. I can’t promise to always be so responsive to requests but it won’t hurt if you try. The three-level exercise provides ‘drill and practice’ on converting improper fractions to mixed numbers and vice versa. There is a tab linking to the older Mixed Numbers exercise where adding, subtracting, multiplying and dividing are also covered.

Congruent Triangles has been updated with a new level 3, new exam-style questions and a new ‘pairs’ game. To be honest the pairs game is way below the pitch of the rest of the levels but it was very easy to create and I know some will find it a fun introduction to the concept.

For a long time I have wanted to create help videos for all the online exercises but it is such a time-consuming process. Currently most of the help videos are ones I have found on You Tube and, of course, were not made specifically for Transum exercises. I have now begun the process of making the videos I have been planning for such a long time. One of the first ones shows you how to fold a regular pentagon from an A4 sheet of paper. 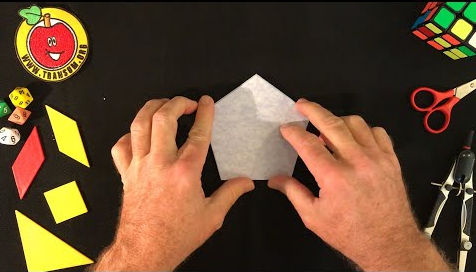 Now that December has begun you are officially allowed to enjoy ChristMaths activities in your lessons for the rest of this Term. Over the years I have added many resources to this collection knowing they will only be appropriate in one month out of the twelve so don't miss the opportunity while it lasts.

I’ve always had a fondness for Christmas Maths activities which began when I was in Primary school and first shown how to calculate the total number of presents delivered according to the song Twelve Days of Christmas. My enthusiasm increased when I became a Maths teacher and was invited to the Maths Association Christmaths evenings at the University of Birmingham. A shout out to John Eden, Anne Eden and Trish Morgan who I remember creating exiting themed mathematical activities and making those evenings so much fun. I hope the Transum Christmaths collection helps continue that tradition. 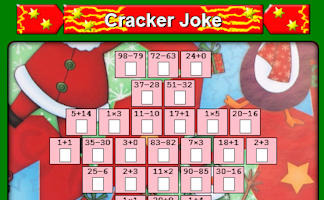 The solution to the puzzle of the month can be found as follows:

I send my festive good wishes to you, your families and your pupils. I hope 2020 is a great year for you and that you stay healthy, wealthy and mathematically enthused!

P.S. Why can’t Santa spell PLUS from the letters in the second half of the alphabet?