7, reasons to get an exam question wrong

This is the Transum Mathematics Newsletter for October 2017. As usual I will begin with the puzzle of the month.

In the fantasy world of Maths puzzles there aren't any stopwatches but there are two egg timers. One of them measures 7 minutes and the other measures 4 minutes. I want to use them to time my daily juggling practice which I want to last for exactly 9 minutes. How can I do it?

The answer, if you don’t manage to figure it out yourself, is at the end of this newsletter. 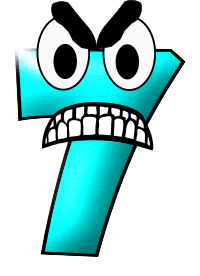 The most amazing thing I learnt this month was the effect the number seven has on exam performance. I have been teaching since the early eighties and didn’t, until this month, know about this surprising phenomenon.

The news came to me via the wonderful Mr Barton Podcast. Craig was interviewing Trevor Senior who is AQA’s Chief Examiner for the Maths GCSE. When asked about his favourite number seven he related the astonishing fact that if the number seven appears in an exam question the success rate drops by about 10%.

I was fascinated by this and it gave me an idea for a Transum activity that would collect some data. I decided on a ten question exercise intended to test pupils’ written methods. The add, subtract, multiply and divide questions would be randomly generated in pairs. One question of the pair would contain a seven and the other would not. Pupils type in their answers and the system would mark them. The data from those getting at least five questions correct would be recorded in the database and then presented to the pupils at the end of the exercise.

It is intended that pupils do the exercise without knowing the purpose of the data collection. The exercise is a good opportunity to practise written methods so that can be given as the reason for doing it. The title "Heptaphobia Research" is suitably cryptic to disguise the data-collection purpose of the exercise.

At the time of writing only ten people have completed the exercise and the results show that the number seven does not have the effect I was expecting but it's early days. We need hundreds of people to contribute to the data before we can begin confirming our hypothesis.

With that in mind could I ask that if you have a class that could do with a bit of arithmetic practice, please ask them to do this activity. The more people that take part, the more valuable the data will be. It would be good if the database grows to be the same size as the times tables database which currently has over two hundred thousand sets of data.

An activity that has been on the Transum website for many years now is called Pentransum. It is a collection of multiple choice questions suitable for pupils in Key Stage 3. When a pupils has answered 20 questions correctly they are invited to suggest a question of their own. If I consider it to be suitable it is added to the collection of questions in the database.

When designing a good multiple choice question, as well as coming up with meaningful distractors, you have to choose in which position the correct answer will appear. I found it interesting that about twice as many submissions placed the correct answer in the middle position (C) than the two extreme positions (A) or (E). I guess that’s human nature to subconsciously think that something in the middle is more hidden than something on the outside.

I have used a Casio fx350ms calculator with GCSE students for many years but, to keep up with developments, have now got a Casio fx350es plus. I’m sure many people, like me, don’t have the time to learn all the functions available and sometimes a student will show you something that will stop you in your tracks. Last month I learned that the FACT function will display a number in its prime factors. Very useful for working out if a large number is prime. 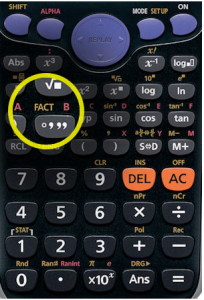 One of the new additions to the website last month is a multi-level quiz called Systematic Listing Strategies. Level 1 is a collection of listing puzzles for younger children which encourage them to develop logical methods of listing. The higher levels include standard combination and permutation questions. Let me know what you think.

Here is the answer to this month’s puzzle. Start the seven and four minute egg timers together. As soon as the four-minute timer has finished start it again.

When the seven-minute timer has finished start juggling.

Restart the four-minute timer two more times each time it finishes to obtain the nine minutes of juggling time.

P.S. Why do mathematicians think that Halloween is the same as Christmas?