Happy New Year to you, your family and your pupils. I hope 2016 brings you happiness and that a small part of that happiness comes from your use of the Transum online activities.

We’ll start the year off with a strange puzzle for your pondering pleasure.

While you think about that here is an update of the new activities that appeared on the Transum website last month. 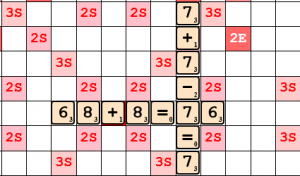 The game Numerate is the numerical version of Scrabble. Players take it in turns to create interconnecting equations on the game board and, in doing so, earn points depending on the complexity and placing of their tiles.

An addictive new grid-shading puzzle called Cryptographic challenges you to find the pictures by using the number string clues at the end of each row and column. The puzzle was created as a child-accessible version of the puzzle included in the Christmas cards sent by the director of GCHQ, Britain’s security and intelligence organisation.

As a Maths teacher, do you know the ultimate, and most probably the first, mathematical riddle? It is about the life of Diophantus, the father of algebra, who lived in the second century. The riddle can be solved by forming and solving an equation containing fractions. You can read more about this on the new "How Old Was Diophantus?" page.

The "Search for Infinity" is a trial-and-improvement challenge in which pupils manipulate Lissajous figures to produce beautiful patterns in their search for the rotated figure-of-eight symbol.

In addition to these new activities many of the existing activities have been added to and improved. I hope they are even more useful supporting your teaching.

If you are based in the UK you will have probably heard the news this week that every child will be expected to know their times tables off by heart when they leave Primary school as part of the Government’s "war on innumeracy".

Nicky Morgan, the Education Secretary, has unveiled plans to test 11-year-olds on their multiplication skills in new online tests which will be introduced to all Primary schools next year.

There are those, however, who question the necessity of the tests, especially given the costs of administering them. Bafflingly, there is also still a vocal minority who, for one reason or another, believe that children shouldn’t learn their times tables and deride rote learning as having no place in a 21st Century education.

Good Primary teachers know that ‘blended is best’ and that a small amount of rote learning of the multiplication tables pays dividends supporting pupils in other areas of mathematics for the rest of their lives.

On the Transum website, the most popular single activity for many years has been Tablesmaster which is a self-marking online test that encourages pupils to improve their ability to recall their tables so that they can improve their personal best times. The Reverse Bar Chart and Tables Tips add support and motivation though many pupils are more motivated by the High Score Chart. If you haven’t seen it before, the main Transum Times Tables page provides links to many activities which are very effective in helping children learn their multiplication facts and is just as relevant for Secondary school teachers as for Primary.

The answer to the puzzle for this week can be answered by expressing each thing in terms of tocks:

So the smallest is 3 tacks.

Because it had no real roots.