Drag the jigsaw pieces onto the frame so that the Roman numerals are in order from smallest to largest. 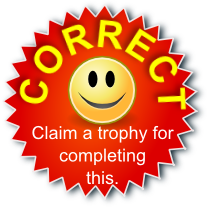 If you aren't an expert on Roman numerals here is an explanation:

Numbers are formed by combining symbols together. So II is two ones, i.e. 2, and XIII is a ten and three ones, i.e. 13. There is no zero in this system, so 207, for example, is CCVII, using the symbols for two hundreds, a five and two ones. 1066 is MLXVI, one thousand, fifty and ten, a five and a one.

Symbols are placed from left to right in order of value, starting with the largest. However, in a few specific cases, to avoid four characters being repeated in succession (such as IIII or XXXX) these can be reduced using subtractive notation as follows:

Explanation adapted from the Wikepedia article on Roman numerals.

Don't wait until you have finished the exercise before you click on the 'Check' button. Click it often as you work through the questions to see if you are answering them correctly.