The shortest month has ended though for those locked down it may not have seemed that short at all. As a diversion here is the newsletter for the month of March 2021 and I’ll waste no time in getting to the puzzle of the month.

Chris Smith, Scottish Teacher of the Year 2018 and author of a very popular newsletter, wrote a puzzle about his three children:

"I gave Heidi, Logan and Daisy a whole number I was thinking of."

"Daisy told me the final answer to their unpredictable calculations was 173. What number did I give them to start off with?"

The answer and my method of finding it is at the end of the newsletter but don’t peep until you have given it some thought.

As I am writing this I am multitasking. My Pythagoras’ Theorem video should be finished in time for March but as yet I don’t know for sure that it will be as one long section of audio didn't record correctly. The Rounding video, produced earlier in February however has already had many views and I hope it has helped numerous pupils with the Rounding exercises.

A new Level 6 has been added to the Ratios exercise on the suggestion of a Transum subscriber. It provides questions of a type that are often misunderstood by pupils according to Mr Barton’s Diagnostic Questions.

Are exercises better than games or is there a place for both? Well I firmly believe the latter and a good example would be the new DiceGebra game that was created last week. This new game includes substitution, inequalities and excitement. I have tried it with a student remotely using Zoom's screen sharing and the feature that allows the person not doing the sharing to interact with the shared screen. This feature is new to me but allowed the game to be played as if we were in the same room. 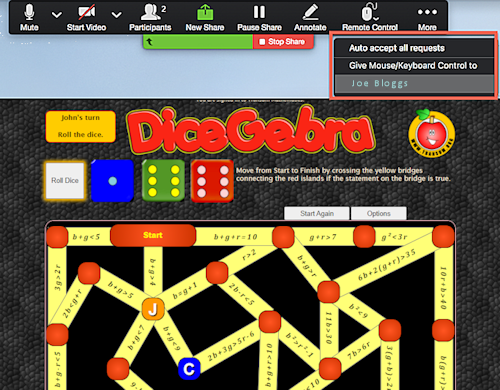 Lots of other Transum games can be used in this way too as I mentioned in last month's newsletter. I should think this would be particularly useful for one-to-one tutorials, a great way to finish a lesson.

Over the years I have received lots of inspiration for new Transum activities from Twitter. Last week I saw a fascinating tweet containing a question from Kit Yates which, at first glance seemed quite easy.

True or False: This shape has two right angles.

Of course there are no right angles in a semicircle. But on reflection, thinking of the notion of ‘approaching a limit’ I had to think twice. We are quite happy thinking of the gradient of a curved line at a point so why doesn’t the same thinking apply when the curve of the circumference meets the diameter. That is assuming that the straight line in the diagram is a diameter because it could be a chord that passes close to, but doesn’t go through the centre of the … wait a minute, it may not event be part of a circle at all.

I suppose the key ingredient here is the definition of a right angle. Where do you go for your definitions? Is the angle between curves defined as the angle between their tangents at the point of intersection? Should the accepted answer depend on the pupils' ages (stage of mathematical understanding)?

This question can initiate lots of discussion for older students so have developed it into an advanced Starter called Curved Angles.

Also on Twitter I saw a beautiful collection of 26 bar charts showing the frequencies of letters of the alphabet grouped by their position in English words. That information adds another dimension to the analysis of the coded messages in the Code Breaking challenge. Cycle through the tips to see many items for consideration when deciphering the messages. Those bar charts are at the bottom of that page. Have a go yourself; do you know all the possibilities for double letters? Do you know what letter is most likely to be the one after an apostrophe? How many single letter words are there?

I hope you have found that the Transum website is running much better now. A great deal of my time during February was taken up managing the migration to a new, very expensive, virtual private server hosted by a very large web hosting company. At times the process was very frustrating particularly because whenever I phoned to speak to a technician at this large hosting company it was not the same person I had previously spoken too. I’m sure you can imagine the challenges. There were so many little things that had to be configured and I was so relieved when I saw that it actually worked.

Thanks to Chris Smith for giving me permission to use his puzzle in this month’s newsletter.

As usual I used the letter n to stand for the number that Heidi multiplied. I knew that she ended up with a multiple of four (4n) or a multiple of five (5n).

I next combined Logan’s and Daisy’s operations to find their overall effect. I saw there were four possibilities:

Logan added 4 and Daisy subtracted 5. The net effect is to subtract 1 from Heidi’s number.

Logan added 4 and Daisy subtracted 4. This would not change Heidi’s number.

Logan added 5 and Daisy subtracted 5. This would not change Heidi’s number.

Logan added 5 and Daisy subtracted 4. The net effect is to add 1 to Heidi’s number.

I now know that Daisy’s answer was one of the following:

As Daisy’s answer was known to be 173 we can discount all but one of the possibilities above.

So Chris was thinking of the number 43.

P.S. All prime numbers except 2 are odd, this makes 2 the oddest prime!