The Power of Christmas

Happy Christmas. This is the December Transum newsletter coming to you with lots of festive cheer and good wishes for the future.

You will probably arrive at a first answer fairly quickly but there are actually four different answers. Can you find all four? The answers will be given at the end of this newsletter after a rundown of the notable new features on the Transum website. 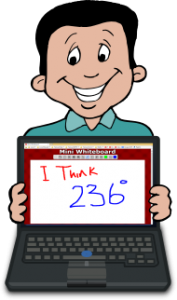 Although they are not a new idea, many teachers have never used mini whiteboards in class. The fact is that most classrooms are more likely to have pupils with computing devices than mini whiteboards so this simple facility allows you to make alternative use of the devices. Pupils write or draw their answer to plenary questions on this whiteboard simulator then hold up their devices so the teacher can see. This is a much better idea than putting hands up! This way the teacher can instantly see what everyone is thinking rather than just one person.

I would like to say that I am surprised that the Broken Chessboard Puzzle has been completed by so many people. The puzzle was first made popular by Henry Ernest Dudeney (1857 – 1930) who was an English author and mathematician. The puzzle appeared in his book 'The Canterbury Puzzles and Other Curious Problems' in 1907. I thought solving the puzzle would be too difficult for most people but I have been proved wrong. Congratulations to all those people who have earned a trophy for finding a correct solution.

The Starters for 6th March and 4th December have both been replaced with new ideas. The first is the Goat Grazing situation I have used for decades to introduce the topic of Loci. The latter challenges pupils to imagine a dice reflected in two mirrors. Quite a challenge for many.

The number of printable worksheets available only to subscribers is rapidly increasing. Even in these days of hi-tech it a good idea to provide variety to the learning experience with more practical activities particularly relevant to some Maths topics more than others.

Finally I would like to say how much I have enjoyed a new app I downloaded (free) to my iPad. It is called Sumaze and has been produced by MEI. Perfect for Year 12 students who need practice with inequalities, the modulus function, indices, logarithms and primes. It is also useful lower down the school but certain sections such as the logarithm puzzles would of course be inaccessible. Solving the thoughtfully constructed puzzles brings an enhanced understanding of the basic mathematical concepts in a fun setting. I’m stuck on the final level in Fermat’s Room so any suggestions gratefully received.

Are you having a problem thinking what to write in the Christmas cards you are sending to your Maths teacher colleagues? How about this:

Talking of Christmas and puzzles, here are the four answers to this month’s seasonal puzzle which is also the Starter for 16th December and called The Power of Christmas:

Have a happy and merry Christmas and enjoy the Transum festive activities.

P.S. Q. Why did the pupil get closer to the fireplace when doing Maths homework?
A. Because logs help you multiply!