Use the pieces of the tangram puzzle to make the basic shapes (without overlapping) then complete the table showing which shapes are possible and which are not. Hold down the shift key [or shift] while you drag to rotate the pieces. 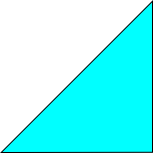 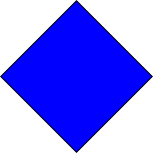 Fill in the table then click the button that will appear below.

*For the purposes of this exercise the following definitions apply:

A Triangle is a plane shape with three straight sides

A Rectangle is a four sided shape with opposite sides parallel and all angles the same. A square is also a rectangle.

A Trapezium (or trapezoid) is a four sided shape with one, and only one, pair of opposite sides parallel. more...

This is the UK usage of the word trapezium which is called a trapezoid in the US. According to the Oxford English Dictionary, the confusion of trapezium and trapezoid between the United States and Great Britain dates back to an error in Hutton's Mathematical Dictionary in 1795, the first work of its kind in the United States, which directly reversed the accepted meanings. Hutton assigned trapezium to "no sides parallel" and trapezoid to "two sides parallel" (Simpson and Weiner 1992, p. 2101).

Although some definitions state at least one pair of opposite sides parallel, which include a square, rectangle and parallelogram as trapezia, we are using the Archimedes definition as having precisely two parallel sides.

A Parallelogram is a four sided shape with opposite sides parallel but adjacent are not equal. A rhombus is also a parallelogram. more...

Though technically squares and rectangles are parallelograms we have added the term 'adjacent angles are not equal' to our definition of a parallelogram to make this exercise more interesting.

A Pentagon is a plane shape with five straight sides

As you make each shape you could take a screen grab (use the Snipping Tool in Windows) to keep a record of your findings.

The tangram puzzle is believed to have been invented in China and then brought to Europe by trading ships in the early 19th century. It became very popular in Europe during World War 1 and is now one of the most popular dissection puzzles in the world.

Similar puzzles for you to try:

There are solutions with diagrams to this puzzle but they are only available to those who have a Transum Subscription.

"The late Mr. Sam Loyd, of New York, who published a small book of very ingenious designs, possessed the manuscripts of the late Mr. Challenor, who made a long and close study of Tangrams. This gentleman, it is said, records that there were originally seven books of Tangrams, compiled in China two thousand years before the Christian era. These books are so rare that, after forty years' residence in the country, he only succeeded in seeing perfect copies of the first and seventh volumes with fragments of the second. Portions of one of the books, printed in gold leaf upon parchment, were found in Peking by an English soldier and sold for three hundred pounds. A few years ago a little book came into my possession, from the library of the late Lewis Carroll, entitled The Fashionable Chinese Puzzle. It contains three hundred and twenty-three Tangram designs, mostly nondescript geometrical figures, to be constructed from the seven pieces."