There are 366 different Starters of The Day, many to choose from. You will find below some starters on the topic of Games. A lesson starter does not have to be on the same topic as the main part of the lesson or the topic of the previous lesson. It is often very useful to revise or explore other concepts by using a starter based on a totally different area of Mathematics. 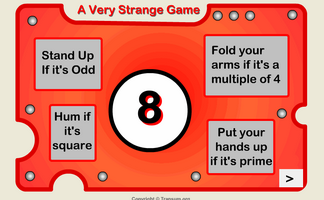 Four different actions depending on the number which appears. 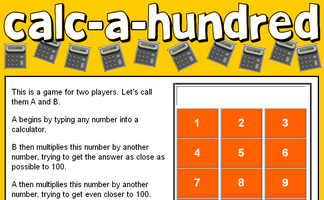 A game for two players requiring a calculator and thinking skills. 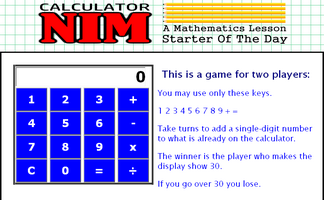 A game in which players take turns to add a single-digit number to what is already in the calculator. The winner is the player who makes the display show 30. 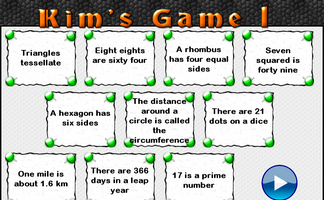 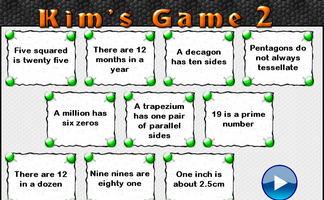 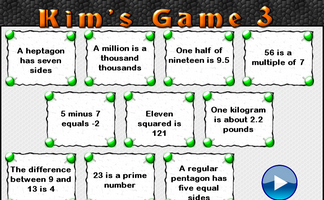 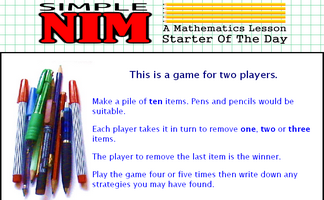 The classic game of Nim played with a group of pens and pencils. The game can be extended to the multi-pile version.

A game involving mental arithmetic and strategy for two players or one player against the computer.

Develop your skills and understanding of rotation in this fast-paced challenge.

A memory game to be projected to help the whole class revise the circle angle theorems.

The classic dots and boxes two-player game with the addition of some fractions which determine your score.

The classic dots and boxes game with the addition of some positive and negative numbers which determine your score.

This is a game for two players. You should know how to find the mean, median and range of a set of numbers.

A pairs game based around ten theorems about the angles made with chords, radii and tangents of circles.

The traditional pairs or Pelmanism game adapted to test the ability to compare analogue and digital times.

Match the congruent shapes, those with the same shape and size.

An online board game for two players evaluating algebraic equations and inequalities.

An online darts game for one or two players requiring skill, strategy and mental arithmetic.

A fun game requiring you to find numbers which add up to the target number as quickly as possible.

You will need to be quick on the draw to shoot all of the numbers except the square numbers.

An online board game for two players involving prime and square numbers and making choices.

Find the expression from a series of guesses and clues.

A strategy game. Play against the computer to select three numbers that add up to 15.

The digital version of the popular fizz buzz game. Press the buzzers if they are factors of the counter.

Find the matching pairs of diagrams and formulae for basic geometrical shapes.

The hardest multiplication facts (according to Transum research) are presented in the form of pairs games.

The traditional pairs or pelmanism game adapted to test knowledge of indices.

A racing game for two players in which they use vectors to control the movement of their cars.

Match the description of the loci to the diagram of the construction.

An exciting and thought-provoking number placing game for two players or one player versus the computer.

The traditional pairs or Pelmanism game requiring the ability to recognise some of the great mathematicians.

A game of buying and selling property with maths questions thrown in for good measure.

This application will pick the bingo numbers for you and present each of the numbers as a mathematical expression.

Nim is a mathematical game of strategy in which two players take turns removing objects from groups of objects.

A lively numeracy game requiring you to align three numbers to create the given target sum or product.

Earn points by creating equations on the grid in this game of equations.

Find the pairs of numbers that multiply together to give a product of 240 in this collection of matching games.

Find pairs of playing cards of the same suit which add up to eleven.

Find the pairs of numbers that add up to 21 in this collection of matching games.

A great puzzle requiring you to use all of the cards to create a continuous red line from start to finish.

Memorise the digits of pi with help from some musical notes.

Imagine you are on a desert island with nothing but a pack of playing cards. Do you have to stop learning mathematics?

The Transum version of the Top Trumps game played online with the properties of polygons.

A game for two players who take turns to select two numbers that add up to a prime number.

This is a version of Wari, one of the oldest known games to still be widely played today. It involves small prime numbers.

The traditional pairs or pelmanism game adapted to test knowledge of rotational symmetry.

If the last card put down equals the previous card to the nearest whole number then all players race to shout SNAP!

An online game for one or two players requiring an ability to estimate angles as bearings.

A game for two players who take turns to select two numbers that add up to a square number.

A game against the clock to find the numbers which add up to the target number.

Use the arrow keys to collect all the multiples in order while avoiding the Conga Virus!

Revise multiplication facts by racing across the screen to match the times tables question with the correct answer without getting hit by lightning.

A one or two player game. The objective is to grab all the multiples of the chosen times table faster than the other player.

A strategy game based on claiming tokens in specific rows and columns.

This basic version of Nim is a mathematical game of strategy in which players take turns removing sticks from a pile.

An adventure game requiring students to solve puzzles as they move through the old mansion.

A mini adventure game containing maths puzzles and problems. Find your way through the maze of tunnels to find Goldberg's magic harpsicord.

Develop your skills translating and rotating shapes in this fast paced classic game.

A game for two players or teams testing their speedy reactions to mental arithmetic questions.

The traditional pairs or pelmanism game adapted to test knowledge of Venn diagrams.

Find the mathematical word from a series of guesses and clues.

Rotate the cogs to catch the flying numbers in the correct sections.

Find the hidden wallaby using the clues revealed at the chosen coordinates.