There are 366 different Starters of The Day, many to choose from. You will find below some starters on the topic of Graphs. A lesson starter does not have to be on the same topic as the main part of the lesson or the topic of the previous lesson. It is often very useful to revise or explore other concepts by using a starter based on a totally different area of Mathematics. 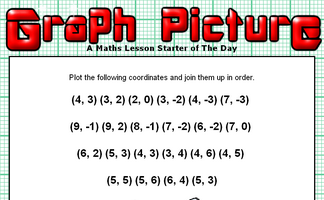 Plot the given coordinates then join them up to form a picture. 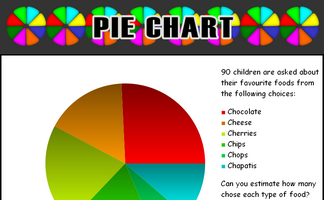 An exercise in estimating what the sectors of a pie chart represent. 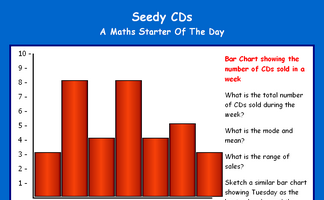 Interpret data given in the form of a bar chart then create a new bar chart showing the given statistics.

A Show Of Hands

Produce a number of graphs and charts from a quick show of hands.

Place the cartoon characters on the scatter graph according to their height and age.

Practise this technique for use in solving quadratic equations and analysing graphs.

Arrange the given statements in groups to show the type of correlation they have.

Practise the technique of differentiating polynomials with this self marking exercise.

Equation of a Line Through Points

Match the equations of the straight line graphs to the clues about gradients and points.

Equation of a Straight Line

An online exercise about the equation y=mx+c and the features of a straight line graph.

Practise the skill of estimating the correlation of data on a scatter graph in this self marking exercise.

If the container is gradually filled with a steady flow of water which height-time graph would be produced?

Gradient of a Line

Practise the skill of finding the gradients of straight lines by counting squares and dividing rise by run.

Match the equations with the images of the corresponding graphs. A drag-and-drop activity.

Flexible graph paper which can be printed or projected onto a white board as an effective visual aid.

Find the equations which will produce the given patterns of graphs.

An animated introduction to distance-time graphs. Arial photographs of vehicles moving along a road placed side to side form a graph.

Students should be encouraged to stand up and make the shapes of the graphs with their arms.

Pupils move to positions in the room according to their data relative to the walls as axes.

An animated distance time graph to be viewed while a student interprets the graph and comments on the race that produced the graph.

Exercises on indefinite and definite integration of basic algebraic and trigonometric functions.

A selection of linear programming questions with an interactive graph plotting tool.

Collect together in groups the equations of the graphs that are parallel to each other.

Develop the skills to construct and interpret pie charts in this self-marking set of exercises.

Complete a table of values then plot the corresponding points to create a graph.

10 straight line graph challenges for use with computer graph plotting software or a graphical display calculator.

A visual aid showing how various transformations affect the graph of a function.

Test your understanding of distance-time and speed-time graphs with this self-marking exercise.

Use the graphs provided to solve both simultaneous and quadratic equations.