There are 366 different Starters of The Day, many to choose from. You will find below some starters on the topic of Factors. A lesson starter does not have to be on the same topic as the main part of the lesson or the topic of the previous lesson. It is often very useful to revise or explore other concepts by using a starter based on a totally different area of Mathematics. 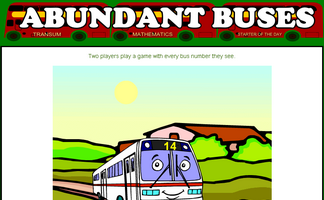 A game based around the concept of factors and abundant numbers. 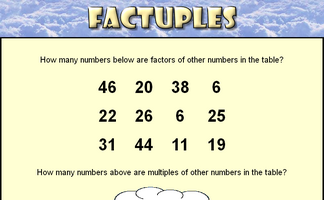 Spot the factors and the multiples amongst the numbers in the grid. 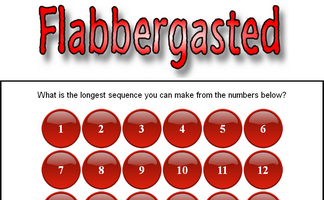 If each number in a sequence must be a factor or multiple of the previous number what is the longest sequence that can be made from the given numbers? 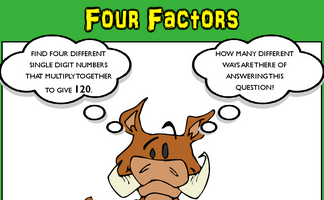 Find four single digit numbers that multiply together to give 120. How many different ways are there of answering this question? 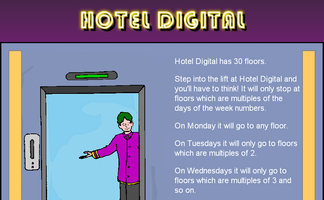 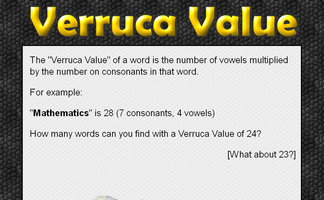 Arrange the digits one to nine to make a number which is divisible in the way described.

Practise using the quick ways to spot whether a number is divisible by the digits two to nine.

A visual aid designed to be projected in the classroom. Here you can find the quick ways of telling whether a number is exactly divisible by the numbers two to twelve.

A puzzle to find four different ways of making 900 by multiplying together three different numbers.

Find the factor pairs of the given numbers and arrange them in order.

Create factor trees to find the prime factors of the given numbers.

Practise the skills of algebraic factorisation in this structured online self marking exercise.

A demonstration of how to find the highest common factor (HCF or GCD) and the lowest common multiple (LCM) of two numbers.

Work out the number of factors a number has then write them all as a list.

Investigate the properties of number with these interactive number grids.

Find the path to the centre of the labyrinth by moving along the prime numbers.

Place the nine numbers in the table so they obey the row and column headings about the properties of the numbers.

Arrange the scallywags and scoundrels on the chairs so that the numbers of any two sitting next to each other add up to a prime number.

A self checking, interactive version of the Sieve of Eratosthenes method of finding prime numbers.

Find square roots and cube roots by first calculating the prime factorisation of a number.

Find three different ways of multiplying four different digits together to get the given target number. There are nine levels for this online challenge.

Practise your times tables with this self-checking multiplication grid