This photograph was taken in August 1996 at a hill temple near Khejarala, Rajesthan, India. Carved into the rock is the board for the game "Sixteen Soldiers" or "Cows and Leopards".

Each player has sixteen stones placed on the intersection of the lines, one player to the left of the board and the other to the right. Players move alternatively and can move in any direction along a line to an adjacent point. A capture is made by jumping over an enemy piece to a vacant point beyond - several pieces can be captured in one move by a series of leaps over single enemy pieces. A player loses when all their pieces have been captured. As an additional rule it is suggested that if a player fails to make a capture, the piece is "huffed" and removed from the board. A variant gives each player seven extra pieces, placed on the points of the triangle to the player's left. 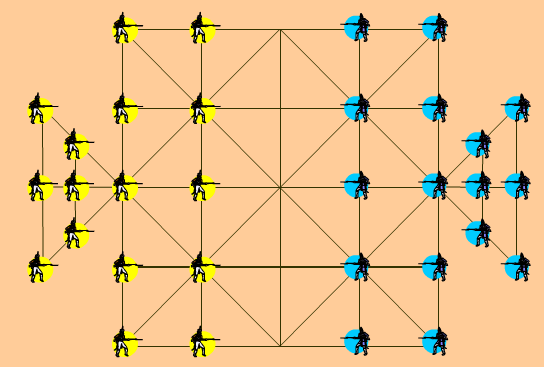 Strategy Games photographs and diagrams by Transum are licensed under a Creative Commons Attribution-Non-Commercial-Share Alike 2.0 UK: England and Wales License. Permissions beyond the scope of this license may be available at "Contact Us".

Click on a link below to explore other parts of the Transum web site: